Can Succulents get Sunburned? 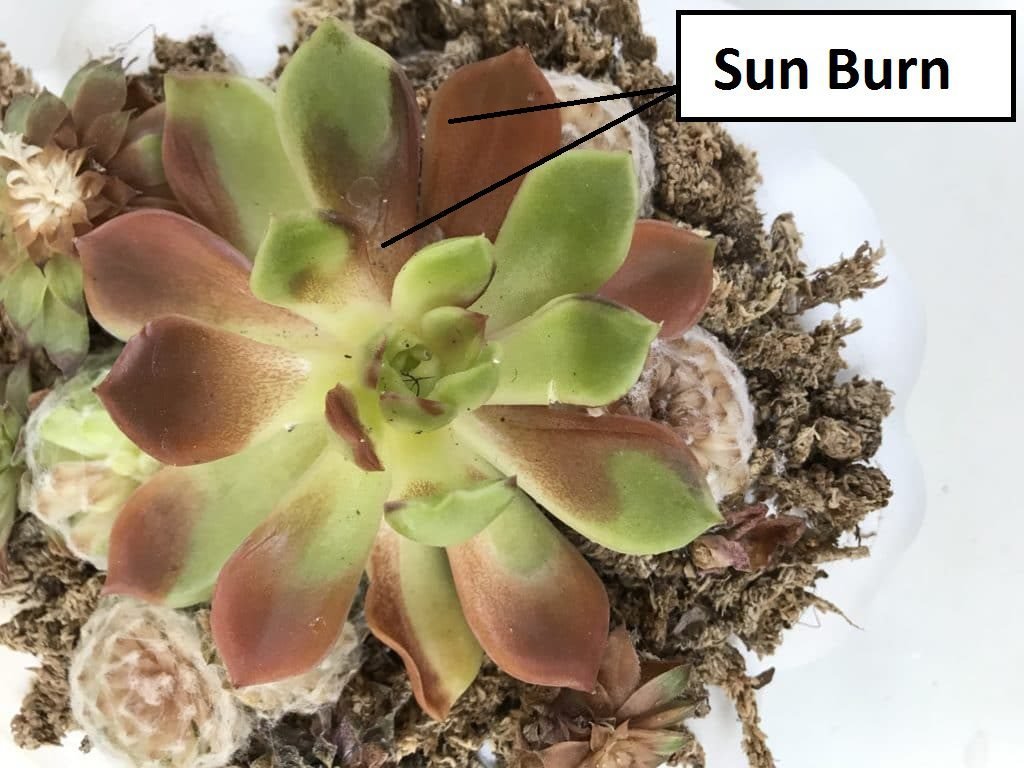 Sunburn is a term we are well known for when our skin starts burning with too much sun exposure. Do you know this happens to succulents also; sometimes they even get fired up by the intense sun rays, especially from the afternoon one. And, as we feel the harsh effects of it, they also start to develop similar ones. And, if the exposure has crossed the limit, it turns more deadly for their existence.

Why and how succulents get sunburn? 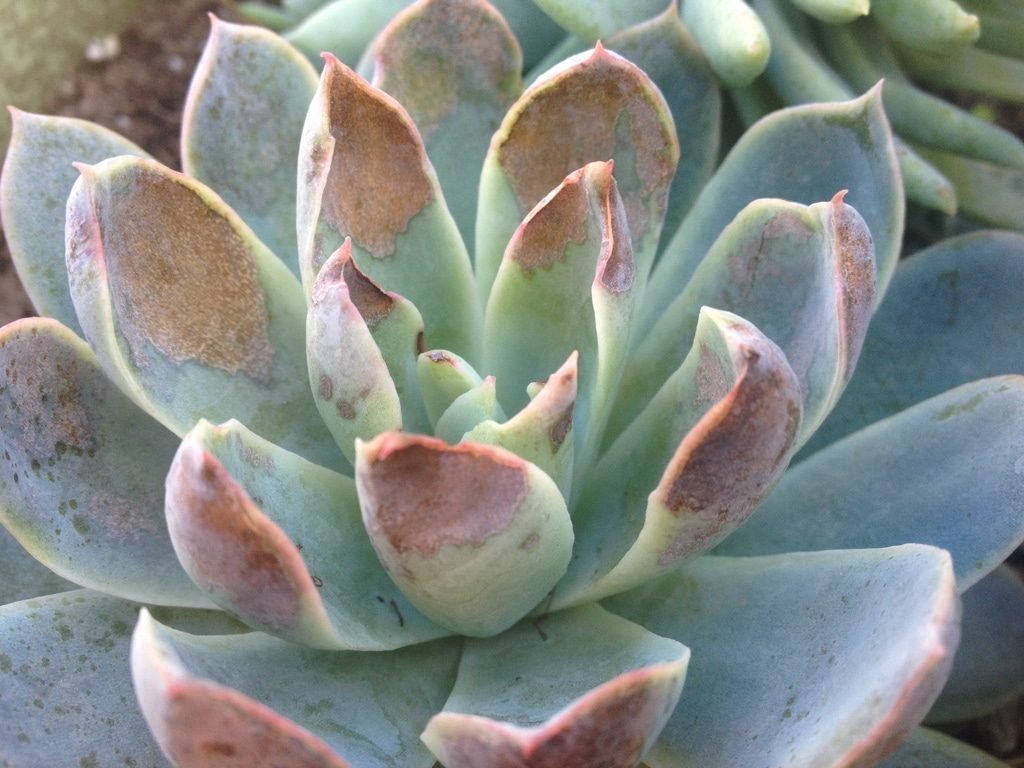 Succulents are tough plants and can handle the harsh sun rays much better than regular plants; maybe the reason behind it is their desert and semi-desert origin. Some indoor succulents from tropical areas are habitual to a humid environment and don’t need too much sun. Also, succulents from desert origin grow under rocks or large trees, saving them from the afternoon sun. But, there is a limit to how much they can tolerate, and when it exceeds, you can start seeing the ill-effects of it. In total, we can say that sunburn is caused by a sudden increase in sunlight exposure for a succulent and therefore it mostly happens in summers, when the sun’s heat is its peak.

How can one tell that the succulent is facing a sunburn situation? How bad can it get? 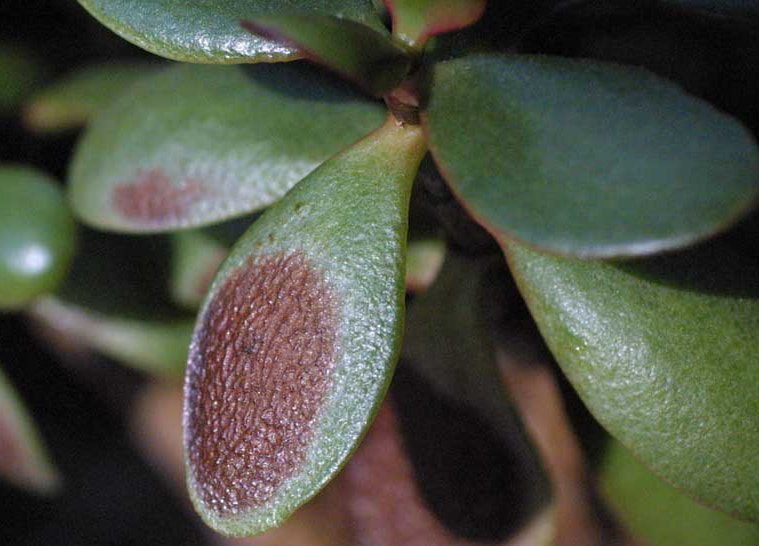 Their leaves tell all the story when it happens to them and that is the sign for a gardener to take care of them and bring them out of this disastrous situation. Because if neglected, this situation can worsen more and can lead to its death too. And, seriously, no one would like to see their lovelies die slowly in front of their eyes.

Signs of sunburn start to appear on the leaves first, starting with brown spots on them, and with the time when the situation becomes worse, it starts to spread to from the edge’s side. The topmost layer of the leaf burns first, resulting in discoloration of it to brown.

Sunburned top layer results in a break of the photosynthesis process, which hurts the food intake, and results in a lack of nutrition and de-growth.

After more exposure, water cells under the layer start to dry up; this leads to the shrinking of leaves. Later they attain that crispy texture; it may exceed so much that, if one touches it, they can hear the crackling noise. Severe sunburns are lethal for a succulent and can result in permanent damage or complete obliteration of it.

Can succulents recover from sunburn damage? Can they be revived to new life?

Brown spots spread across the leaf are one of the major early signs of sunburn. However, this situation is not critical and is reversible, but it is possible only if succulents are taken to the shaded area as soon as possible.

A delay may pave the path for a much grave situation, where the top layer of the leaf starts deteriorating, changing its color to brown. And its texture also varies to dry and crispy, and if the situation worsens, they may crumble on gentle touch.

Coming back from the severe sunburn is mostly not possible, and propagation from a remaining healthy part of a new plant is the only option left.

However, reclaiming early-stage sunburned succulents is not straightforward sometimes. You have to acclimate it to the shady areas also, by reducing the sunlight slowly. This way, they do not get the sudden jolt of atmosphere change.

You can expose them to morning sunlight only, but, moving them away from the direct heat of the afternoon. And soon, they will get accustomed to the newer surroundings, and the new growth will replace the brown spot leaves.

Does climate/weather play a role in increasing or decreasing sunburn chances?

Why some succulents are safe from sunburn and some are not?

It is quite a confusing topic for most succulent lovers, why some succulents in their garden get the sunburn easily, while some stand upright with glory even in the harsh afternoon rays. It depends on some factors that decide the capability of a succulent to withstand the sun’s brightness.

As we know, some succulent varieties belong to arid regions, while some come from tropical areas. Succulents with the basic DNA of desert regions can withstand the sunlight more than those from the low spots. It makes the tropical succulents the favorite one for the indoors, while succulents from arid areas are better for outdoor gardens.

When indoor succulents that are habitual to limited sunlight are exposed to an open environment that receives full sunlight. They are not able to handle the excess sunlight and may start showing the symptoms of sunburn. Some plants are tougher in outdoor garden varieties than others, making them sturdy enough to control the extra sun glare better.

Succulents that are tall and wide receive more sunlight than their shorter counterparts. As they serve as the roof of the succulent garden and shorter ones stay under their shade. Putting small, vulnerable ones under larger ones saves them from direct sunlight most of the time, but some sunlight and dry winds sometimes damage them. Although tall ones are tough, care is essential as excess sunlight in summers may hurt their leaves.

Succulent placement in your garden is also quite decisive for the sunburn issue, as placement of your succulent decides how much sunlight it will get and for which time of the day. One should expose succulents to morning sunlight, and when the sun rays are at their peak in the afternoon, they should be in the shade, as sunlight at that time is the major cause of sunburn. One can use trees to provide shade from the afternoon sun or opt for artificial methods like an umbrella or a construction.

With a better understanding of the sunburn reasons and symptoms briefly explained above, beginners can save their succulents from this situation. Some basic tips told above will help them handle their sunburnt succulent much comfortably.

For getting the visual clarification of the methods and tips, one can refer to the videos.

How to prepare the soil for succulents?

Succulent problems, a gardener should be aware of!

Cobweb succulent problems! How to get rid of them?

Aphids- The Catastrophe Bringers for Succulents

Jellyfish Succulents – Beautify Your Garden into a Mystical Aquarium

Know why Miracle Gro is the best succulent fertilizer?

Types of succulent plants for the garden you own!